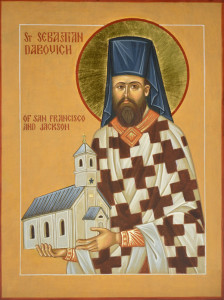 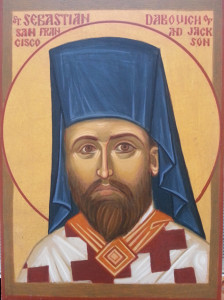 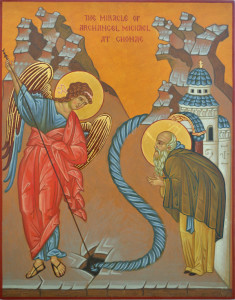 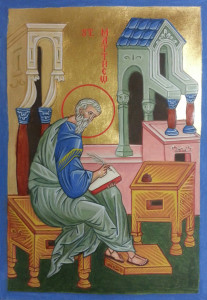 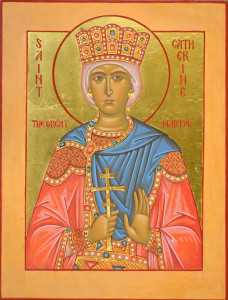 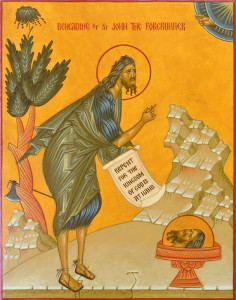 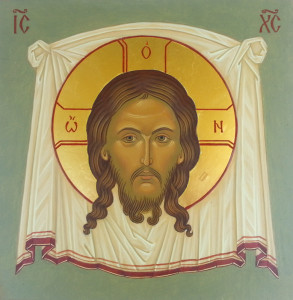 In August, the church commemorates the Icon of Christ "Not Made by Hands," also commonly known as the "Holy Napkin," the "Mandylion," or the "Holy Face." According to the oral tradition of the Eastern Church, the prototype for this image was made by Christ himself as he put his face ...
Read More
By admin on August 11, 2015 in Uncategorized 0 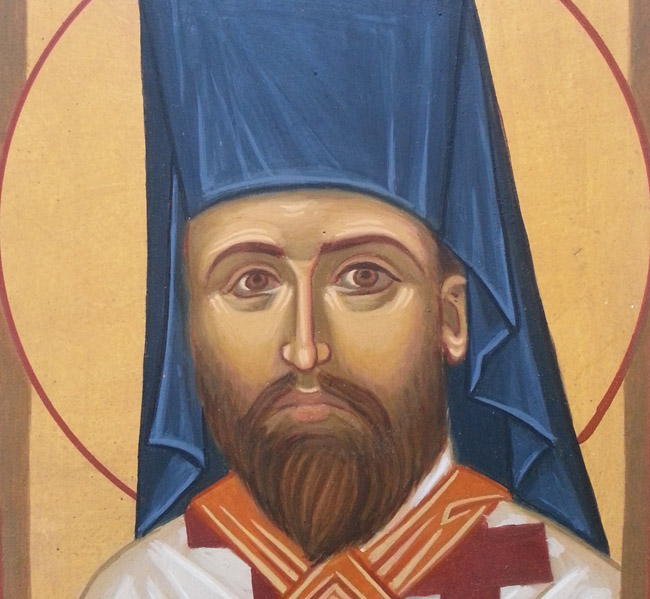 In May, 2015, a council of bishops in Belgrade, Serbia made it official. Archimandrite Sebastian Dabovich, a priest from California, is now Saint Sebastian of San Francisco and Jackson. Our bishop in Los Angeles made haste to put together a huge celebration in September, attended by the Patriarch of Serbia and by many people from all over California and the West Coast, and from other parts of America and several European countries. In anticipation of this event, this summer I painted a small 5”x7” icon of St Sebastian, along with a matching icon of the other new American saint, Bishop Mardarije of Chicago and Libertyville, IL.

For me as a sacred artist, one of the ways I feel closest to God outside of church is during the act of painting an image of Jesus Christ or a holy person – someone who has achieved a state of union with God that inspires me to do better in my own life. Before I begin, I read the hymns composed for him or her, and I say a prayer for the good outcome of my efforts. It also helps to know about the saint’s life, so I gather this information also before starting the project. Then I try to maintain a state of prayer as I work. In practice I find certain parts of the process more prayerful than other parts. I’m a mother, not a nun, so there are times when the environment (and my mind) isn’t exactly quiet, if you know what I mean. But a short prayer with each brush stroke is the ideal I aspire to. I always make sure to pray when working on the face, especially the eyes, and on any delicate lines.

Since not many images of St Sebastian were available to me this summer, I used what I could find. I had an image of him from the promotional material for the canonization celebration, as well as a couple of photographs. First I drew a face in classical Byzantine proportions. Then based on the material I had available, I modified the drawing a bit to incorporate his own unique features, for example I modified the shape of the eyebrows from the classical model to look more like his eyebrows in the images I had. I also referred to these images when building his beard and painting his clothing.

So why was I moved to paint an icon of a brand new saint? When I was a young child growing up, I thought “saints” were people who lived a long time ago in a faraway place. I didn’t think they had anything to do with today’s world. Same thing with miracles – they happened a long time ago, not today. As an adult convert to Orthodox Christianity, I was exposed to recent as well as ancient Orthodox saints and miracle workers. I heard it expressed this way at the canonization: “We feel closest to the saints who are closest to us in time and space.” That is definitely true for me. Like many Americans, I feel a deep love for St John of Shanghai and San Francisco, a twentieth century miracle worker. However, most of the official “American Saints” such as St John were born in other countries and came here as missionaries or bishops. So I felt especially happy about the brand new St Sebastian when I learned that he was born and grew up in San Francisco. Like him, I also had immigrant parents and was the first person in my family to be born in this country. I grew up in Silicon Valley, not far from where he lived and worked. He is indeed close to me in time and place, but I had never heard of him until this past summer. I love learning about the modern saints, because they are the evidence to me that God has not abandoned us. He is still active in the world. Still making us holy, if only we would cooperate. Still as close to us as our heartbeat and our breath, if only we would stop and pay attention. I hope that by using the talent God has given me, I can help other people feel the His presence in their lives as well.