If one were to ask me for three words to describe what we portray in the icon, they would be Incarnation, Transfiguration, and Asceticism (Restraint).

Incarnation is why we have icons in the first place. If Jesus is God incarnate (with a real body, real features), and if that incarnate body is now seated in heaven at the right hand of God the Father, then representational images of Christ are not optional but integral to our faith and practice. If He saves us in both body and soul, representational images of those who have achieved holiness and union with Him are appropriate as well.

To represent the all-important doctrine of Incarnation artistically, I make sure the people I depict are well proportioned anatomically, and that the forms of their bodies are clearly evident under their clothing with feet standing firmly on the ground.

If a tradition has been passed down over the centuries about their appearance, it is not up for re-interpretation. For example, Saints Peter and Paul have a well-documented appearance which has changed little since the early days of Christianity. For the saints whose appearance has not been recorded (e.g. an early martyr of whom little is known), a classically proportioned face in the ideal of Byzantine beauty is used. Since every person is unique in appearance and personality, we portray their unique characteristics as they’ve been handed down to us. 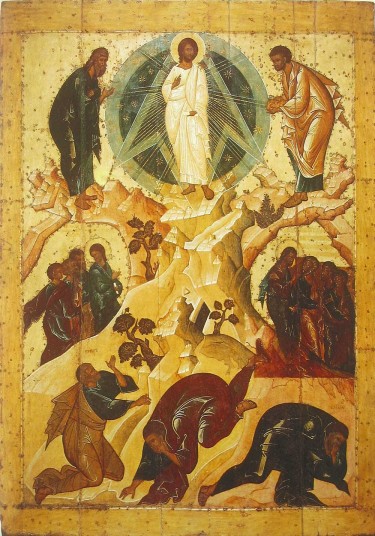 The concept of Transfiguration infuses Orthodox Christian spirituality in general and icons in particular. When I paint, I remember how Moses’ face had to be veiled after his encounters with God because it was so bright, and how Jesus’ face and clothing became bright like the sun in the event we call the Transfiguration. I also remember how some saints have sometimes appeared bright like Moses to their companions, the most famous example being St Seraphim of Sarov.

Artistically I express the light of holiness by using halos and gold leaf, and also by using lighter and brighter colors to define the forms of the garments and especially the face. The icon is a portrait of a holy person as he or she appears in a glorified state in the Eschaton. Therefore I don’t portray any physical weakness or suffering the person had in real life, such as the need for eyeglasses, because the icon shows the saint in a state where every tear has been wiped away, and all suffering in this earthly life has been overcome in Christ.

Since asceticism is a hallmark of Orthodox spirituality, artistically I keep my icons “ascetic” as well by restraint in color and design. I make all the colors in an icon from a just a few natural earth pigments mixed together in different ways to create simple and harmonious color schemes. Instead of complexity, I aim for a direct approach and a restful, calm appearance. Order and calm express themselves in other ways as well, for example in the orderly arrangement of the locks of hair and fur garments. (Even ascetics like John the Baptist or St Mary of Egypt have organized groupings of parallel lines in their “messy” hair.) I also try to avoid excessive embellishment or “bling.” I also purposefully portray the subjects and their surroundings in a calm manner, avoiding all semblance of chaos. It has become popular for some iconographers recently to make references to “chaos” in their work, but the master I studied with emphatically taught me that there is no chaos in the icon, any more than there would be chaos in Heaven.

Ultimately, I aim for everything in the icon to support the face, not distract from it. I want the face to be the first thing people see, and the place where they linger the longest. For me, the expression in the face, especially the eyes, is the most important part of any icon. Lighting the face is the step in the process where I feel first the most trepidation, and ultimately the most joy. I know my icon is successful if the viewer feels a connection with the saint and wants to pray as a result of feeling this connection.

How Learning about Clarity Changed my Approach to Painting Orthodox Icons
Photos from the Glorification of St. Sebastian and more new Icons of him